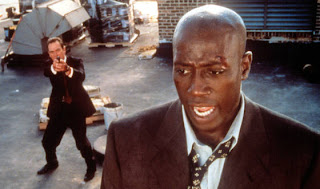 How'd he get away from the officer?

Also he must have watched Wesley Snipes in U.S. Marshals too many times.

You don't get to jump off bridges and come out fine.

Suspect jumps off bridge
Man is in critical condition after leaping to escape police.
By Eva Ruth Moravec - Express-News

A man was hospitalized in critical condition after he jumped off an Interstate 35 bridge over Salado Creek and fell at least 25 feet while fleeing San Antonio police Monday afternoon.

Johnathan Gomez, 20, was taken to San Antonio Military Medical Center with a broken back and head injuries, a police spokeswoman said.

An officer had arrested Gomez on a felony warrant for possession of a controlled substance at a gas station around 1 p.m. in the 1700 block of North New Braunfels Avenue and had handcuffed him, but Gomez was able to run and cross the interstate access road, said SAPD Sgt. Jay Vinson.