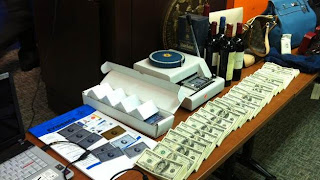 Well, I sure know it ain't any of my card numbers.

I can't afford to eat at any of those places.

NYC waiters held over alleged $1 million credit card scam
Staff from some of the city's top steakhouses among those arrested, NBC reports


More than two dozen current and former waiters and their associates from some of the city's top steakhouses have been arrested in an alleged identity theft ring, accused of stealing credit card numbers from wealthy customers, authorities said Friday.

The Manhattan district attorney, police and the U.S. Secret Service announced the arrests Friday involving a 28-person ring that operated at top metro-area restaurants like Smith & Wollensky, Capital Grille and Wolfgang Steak, as well as Morton’s in Stamford, Conn. and the Bicycle Club in New Jersey.

The story was first reported Thursday by NBC New York.