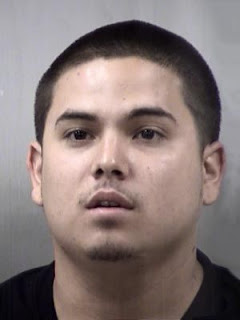 Well, let's prove him guilty beyond a reasonable doubt on all of his charges, stack them, and be done with him.

Remove him from society.

A man arrested for allegedly taking part in a violent home invasion early Tuesday was already wanted on a charge of aggravated sexual assault, records show.

Steven Noel Quintana, 21, was one of three men suspected of breaking into a home in the 4300 block of Katrina Lane. A man and woman, both in their early 20s, said that just after 1 a.m. three men kicked in the door, used duct tape to bind their hands then held guns to their heads, according to a police report. One suspect yelled to the woman, “Where is all the stuff (expletive)?” according to a police report.

The woman begged the men to not hurt the children in the home, which prompted a reply of “She's (expletive) lucky 'cause we aren't here for the kids,” the report said. The ages of the children or how many were in the home weren't available.