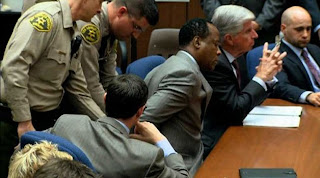 Doctor, you can't always give what the patient wants.

LOS ANGELES (AP) — The single word, "Guilty," brought a muffled shriek in the gallery of the packed courtroom and tears from Michael Jackson's family, but no reaction from the doctor convicted of supplying the King of Pop with the drug he craved for sleep.

With the snap of handcuffs, another chapter in the bizarre saga surrounding Jackson's life came to a close, and the man who once envisioned a glamorous career as the music icon's personal physician was led from the courtroom. Dr. Conrad Murray was going to jail for involuntary manslaughter.

Murray's face was grim but betrayed no emotion. In a few minutes, his life had been shattered and it was likely he would never practice medicine again.