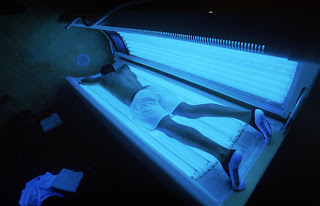 You've got to be freaking kidding me, right?

Tanning beds in the prison?

The only thing I worry about now is that folks here will think this is a good idea.

You know what?  If they want tans bring back road gangs, its not like the roads don't need fixin'

The ITAR-Tass news agency on Sunday cited federal prisons service Viktor Dezhurov as saying the tanning beds at Moscow's Butyrskaya prison will be ready for observances of its' 240-year anniversary this year.

Dezhurov was quoted as saying the tanning beds are meant to compensate for inadequate sunlight in the cells. But inmates will have to pay and at 10 rubles (33 cents) a minute, that's a sizable fee in a country where the average monthly salary is well under $1,000.

The prison's dismal conditions attracted wide attention in 2009 after the death of Sergei Magnitsky, a young lawyer who died of pancreas disease there after inadequate medical care.