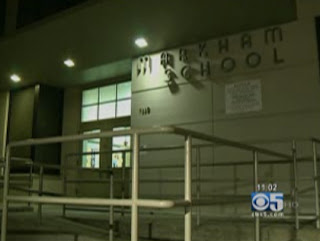 You've got to be kidding me!


OAKLAND (CBS 5) — A teacher at Oakland’s Markham Elementary School has been suspended indefinitely after school officials said a pair of second-graders performed sex acts on each other in class – with the teacher present.

“I think everyone is taken aback over this shocking incident,” Troy Flint, the spokesman for the Oakland Unified School District, told CBS 5 on Thursday. “Of course, it is hard to understand how that could have occurred.”

Flint said the sex acts incident was one of two separate cases under investigation involving the teacher; both incidents occurred last week in the same classroom but he said they didn’t come to the attention of school officials until Wednesday.

In one case, several students apparently took off their clothes and were naked in the classroom. In the second incident, a boy and girl reportedly engaged in oral sex in front of their classmates.

Flint indicated that the suspended teacher, whose name was not released by the school district, was present for both of the incidents.

Flint and Markham principal Pam Booker said they were limited in terms of the details they could release at this time because of the ongoing investigation into the matter.

Booker noted that the students said to be involved in the incidents were interviewed by school leaders.

In a letter sent to parents of Markham students on Thursday, Booker offered an apology by telling them that the incidents “represent an unacceptable lack of supervision. I understand there is great anger over this news.”
Posted by Sam at 7:57 AM