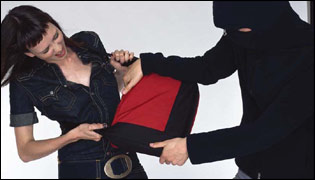 Words just seem to fail me at times like this.

Because I don't want to cuss too much on the Internet.

Animalistic filthy thug.  Here's hoping you get caught and go to prison for a long time.  (where you can be abused by your "friends"; sorry I had to get it out)

NEW YORK (AP) – New York City police said an 81-year-old man and his wife were severely beaten during a robbery in the lobby of their apartment building.

Joseph and Linda Naimo of Staten Island had just closed up their store and had walked over to their apartment building next door when they were attacked Sunday night.

Naimo suffered cuts and bruises. He had celebrated his birthday earlier in the day.

The robbers got away with Naimo’s wallet, which contained $18.
Posted by Sam at 7:44 AM