Ashes to ashes, dust to dust 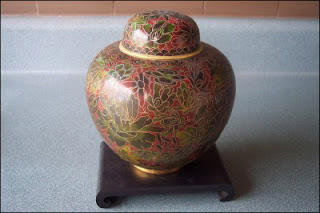 This reminds me of a story that actually occurred to me back when I was a geologist.  The company I worked for, Marathon Oil Company, had several different training courses for geologists to show us real world depositional environments and their ancient analogues.

This was to help us be better petroleum geologists.  In 1981 I was sent on the Carbonate course which in its first part, we traveled to and flew around the Florida Keys and the Bahamas.  (Yes, I know, it was very tough work, but someone had to do it)

Anyway, I collected 5 or so pounds of a very fine, pure white carbonate sand, called oolitic sand in a clear plastic bag.  The next day my roommates and I left our room, which was full of cameras and stuff, and the clear bag of sand which I left in my back pack.  We returned later that evening to find the door unlocked, no equipment or money missing; but the bag of oolitic sand was stolen out of my back pack!

I always swore that someone, somewhere, had stalactites growing out of their nose.

MIAMI -(Reuters) - Burglars snorted the cremated remains of a man and two dogs in the mistaken belief that they had stolen illegal drugs, Florida sheriff's deputies said on Wednesday.

The ashes were taken from a woman's home in the central Florida town of Silver Springs Shores on December 15. The thieves took an urn containing the ashes of her father and another container with the ashes of her two Great Danes, along with electronic equipment and jewelry, the Marion County Sheriff's Office said.

Investigators learned what happened to the ashes after they arrested five teens in connection with another burglary attempt at a nearby home last week.

"The suspects mistook the ashes for either cocaine or heroin. It was soon discovered that the suspects snorted some of the ashes believing they were snorting cocaine," the sheriff's report said.

Once they realized their error, the suspects discussed returning the remaining ashes but threw them in a lake instead because they thought their fingerprints were on the containers, sheriff's spokesman Judge Cochran said.

Police divers were trying to recover the ashes. The suspects were jailed on numerous burglary and other charges.