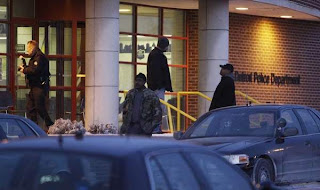 I hope they recover fully.


It was just before 4:30 p.m. Sunday when the gunman came into the police station and started shooting.

A female sergeant in a hallway was hit first. Commander Brian Davis raced out of his office, exchanged fire with the gunman and got shot in the back.

Then the gunman rushed the horseshoe-shaped front desk with his pistol grip shotgun. Sgt. Ray Saati and Officer David Anderson also were shot before the gunman was killed.