You want fries with that bullet? 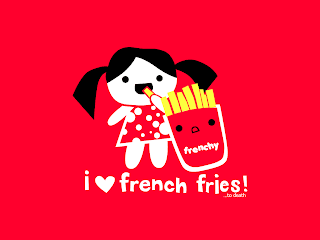 They couldn't have been MacDonald's french fries.

They had to be something really good, like Bill Miller BBQ french fries.

Even still, shooting someone over french fries?  Really?

PHILADELPHIA (CBS) - A man was shot after an apparent argument over fast food in the city’s Northern Liberties section early Monday morning.

The two men were in a parked car near the intersection of 2nd and Callowhill Streets, eating fast food when an argument broke out over french fries, according to police.

The two men got out of the car, started fighting, and investigators say that’s when one of them pulled a gun and shot the other.

The victim was taken to Hahnemann University Hospital in critical condition.

Witnesses tell police the shooter drove off in a silver Mercedes.  The hunt continues for that car.
No word on what started the argument over the fries.
Posted by Sam at 10:00 AM