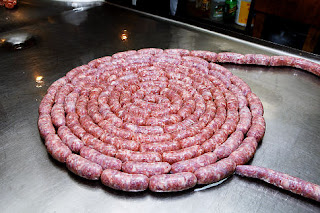 It sounds like an exquisitely colossal waste of time and manpower over someone playing hide the sausage.

On the mobbed-up docks of Bayonne, the six-month probe was known as Operation Missing Link.

Its target: A suspect who swiped a $2 bottle of iced tea and used it to wash down a stolen 50-cent piece of sausage - the lost link that left a bad taste in everybody's mouth, sources told the Daily News.

An investigation of the penny-ante heist was ordered by the Waterfront Commission, the agency charged with policing the docks for mob corruption, drug smuggling and other major crimes, the sources said.

The investigation included scores of interviews over countless hours dating to last August, sources said - even though the victim was reluctant to press charges.

"It's like Capt. Queeg and the strawberries," said New Jersey state Sen. Raymond Lesniak, a harsh critic of the bistate commission.

One of the sources was more blunt: "The whole investigation is bull----. It's a waste of manpower, money and resources."