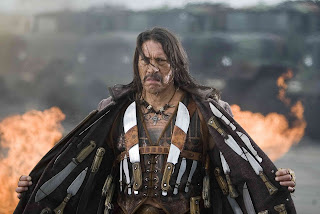 Life in prison might just be a wee bit too good for him.

The defendant, 36, only briefly looked up at the video, which was projected beside him on the wall in 437th state District Court as a crime scene investigator testified.

He could face up to life in prison if jurors find him guilty of hacking to death San Antonio resident Christopher Duncan, 23, in February 2008.