Its up to Judge Pat Priest 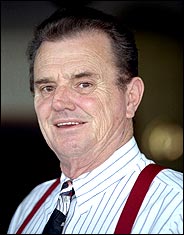 Two days of hearings are to begin in Austin this morning concerning sentencing for former Congressman Tom DeLay.

I think he'll get probation with perhaps some time to serve as a condition of the probation.

AUSTIN — Former U.S. Rep. Tom DeLay will call on his old friend and colleague, former U.S. House Speaker Dennis Hastert, this week to try to help keep him out of prison for his conviction on political money laundering charges.

Two days of sentencing hearings for DeLay begin today in an Austin courtroom before visiting District Judge Pat Priest of San Antonio. DeLay faces a minimum sentence of five years probation, but the maximum sentence on his money laundering conviction is 99 years or life in prison.

“I anticipate that we will seek incarceration in some form,” said Gary Cobb, the lead Travis County prosecutor in the case.