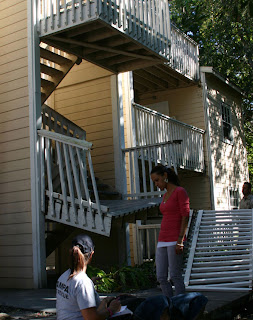 Well, I guess the apartment complex may be on the hook for the stair collapse and any injuries which were caused as the proximate result of the collapse.

IMHO it was a foreseeable result.

A man was in critical condition and two relatives were hospitalized Saturday after an apartment complex stairwell collapsed under them as they chased a burglar Friday night, police said.

Paul Sambrano, who turns 45 today, was injured when he fell on his head at the Bandera Oaks apartment complex in the 1100 block of Bandera Road on the Northwest Side.

Police said Sambrano, his wife and niece were chasing a man they'd been told was seen coming out of a nearby apartment window. As they yelled for him to stop, the stairs gave way.