Our thoughts and prayers are with her family 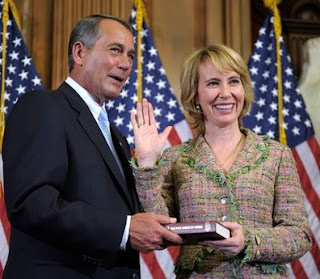 Reports are confusing.  Some say wounded and now saying killed.

My condolences to her husband and family.

NPR.org says she has been killed.

THE AP SAYS SHE IS PULLING THROUGH HOWEVER APPARENTLY A FEDERAL JUDGE HAS BEEN KILLED.  A WOUNDED 9 YEAR OLD CHILD HAS DIED AT THE HOSPITAL.

My prayers go out to the families.

WASHINGTON (Reuters) – Representative Gabrielle Giffords of Arizona was shot in the head while holding a public event in Tucson, Fox News and National Public Radio reported on Saturday.

Fox said 11 other people were shot when an unidentified gunman ran up and began shooting indiscriminately as Giffords addressed supporters.

Giffords was shot point blank in the head, Fox said.

The network said the gunman was in custody.

(Reporting by Roberta Rampton, editing by Anthony Boadle)
Posted by Sam at 1:17 PM