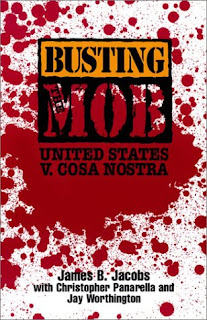 
The FBI calls it the biggest mafia round-up in New York history. More than 100 suspected mobsters are being arrested this morning in connection with numerous federal investigations into New York area mob groups.
FBI agents along with NYPD and State Police officers, and US Marshals were conducting raids that began in the early morning hours.  Federal charges are expected to range from gambling to racketeering to murder.
Law-enforcement officials said members and associates of all five New York mafia families - as well as New Jersey's DeCavalcante family - are among those being arrested.
The arrest operations stretch across the tri-state area with many of the suspects being processed in Brooklyn.  US Attorney Loretta Lynch is expected to announce details of the federal charges later Thursday.
The rest of the story:
Posted by Sam at 7:30 AM