Oh, what a tangled web we weave when first we practice to deceive 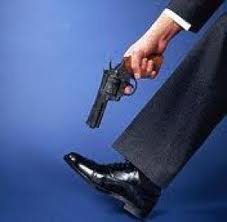 What a mess he caused, shutting down areas and inconviencing thousands of folks.

Not to mention the dishonor he brought to his fellow officers.

What in the world was he thinking?

Authorities arrested Los Angeles school police Officer Jeff Stenroos on suspicion of filing a false police report after he allegedly admitted to fabricating a story that he had been shot last week in Woodland Hills, according to a senior LAPD official close to the investigation.

The official said investigators are still piecing together how Stenroos pulled off the alleged hoax, which sparked a dragnet that inconvenienced thousands of people after police shut down a large swath of Woodland Hills in search of the supposed gunman.

The source added that Stenroos' protective vest showed obvious signs of having been struck by a bullet, and the officer also suffered bruising on his chest. Detectives later raised questions about whether the officer shot himself accidentally and then fabricated a story or concocted the whole scenario.