Well, its one way to clear a traffic jam, isn't it? 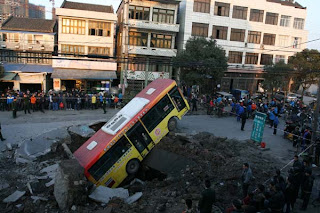 What the heck caused this?

Thank God no one was killed or seriously injured.

HANGZHOU - An explosion on a road in East China's Zhejiang province tossed a bus without passengers into the air, injuring the driver and a 6-year-old boy on the roadside, local fire fighters said Sunday.

The blast occurred at 4 pm in the middle of a road in Ruian city. No smoke was seen after the blast and police have preliminarily excluded the possibility of a man-made explosion. The bus, carrying no passengers, was flung four meters into the air, falling into a 10 meter by three meter deep pit caused by the explosion, according to fire fighters.

The bus driver and the boy suffered only minor injuries.

An investigation into the cause of the explosion is underway.
Posted by Sam at 9:27 AM