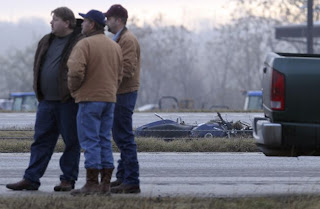 My condolences to his family and friends.

An allegedly speeding motorcyclist lost control of his vehicle on the East Side and fatally crashed Monday morning, San Antonio police said.

Officer Darrell Curry said the man, whose name or age was not immediately released, was riding a motorcycle south on Loop 410 around 7 a.m. when he veered off the roadway, struck several poles in the median and was ejected.

The man's body and his motorcycle landed about 50 yards apart in the grassy median, Curry said. Motorists told police the man appeared to be riding faster than 100 mph moments before the crash.