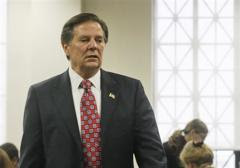 Former Congressman Tom DeLay was sentenced to three years in prison and was senteced on another charge to five years probated for ten years.

My prediction of probation was only partially true.

The sentence comes after a jury in November convicted DeLay on charges of money laundering and conspiracy to commit money laundering. DeLay was once one of the most powerful men in U.S. politics, ascending to the No. 2 job in the House of Representatives.

Senior Judge Pat Priest sentenced him to the three-year term on the conspiracy charge. He also sentenced him to five years in prison on the money laundering charge but allowed DeLay to accept 10 years of probation instead of more prison time.