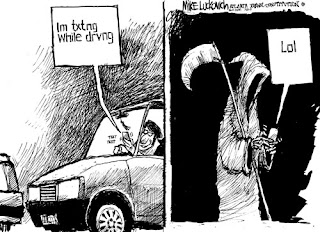 Okay then; no more texting while driving.

However you say it don't do it in San Antonio.


Drivers caught typing on their cell phones while behind the wheels of their cars now can expect to pay a fine.

The 90-day grace period that when into effect after the City Council's unanimous passage of a texting ban in October ended Saturday, police said.

Motorists pulled over for texting while driving will face fines up to $200, according to the ordinance.