In our thoughts and prayers 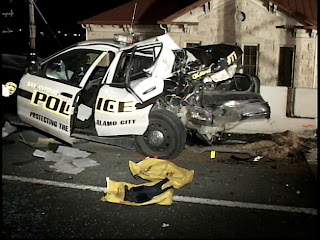 Jesus Christ!  This is getting old.  Its sickening to have to read, nearly every weekend, reports from the drunken carnage on the highways in and around San Antonio.

This fine young man, three years on the force, who survived combat in Iraq, continued in his service to his country and community, only to lose his leg to a drunken driver.

I hope this officer recovers fully, and can return to duty in some capacity if he so chooses.

As for the drunken driver, I'd prefer to have him go away for as long as possible.

A San Antonio policeman's leg was severed when he stopped to help two stranded motorists early Saturday and was hit by a drunken-driving suspect.

The impact flipped him over a guardrail along Interstate 35 near the southwest edge of downtown. As he dangled from the elevated freeway, the motorists grabbed him by the belt, saving him from plummeting 35 feet.

Officer Michael Thornton, an Iraq combat veteran three years into his police career, was standing behind the trunk of his patrol car pulling out emergency flares when he was rear-ended by a Dodge Ram truck.