The baby is safe 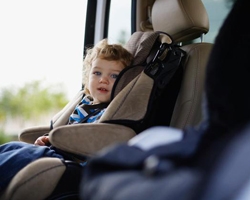 A man was arrested Thursday on suspicion of trying to carjack a vehicle with a baby strapped in the backseat.

Police said Jason Peter Nicholson, 30, surprised a woman at a gas station near Interstate 35 and Cevallos Street as she filled her tank around 7 a.m. Thursday.

But as he tried to jump in and drive away, the mother began screaming, and several people alerted police.