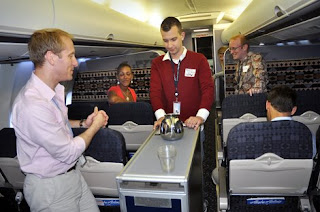 Yes, I know its hard to believe someone might behave badly on an airplane.

I hope TSA doesn't make us all fly barefoot from now on because this guy kicked the drink-cart over.

A passenger went berserk aboard a JFK-bound flight yesterday after he found his path to the bathroom blocked by a beverage cart -- kicking it over and punching a flight attendant in the stomach, sources told The Post.

Michael Isabelle, of Framingham, Mass., allegedly started the ruckus at around 6 a.m. aboard American Airlines Flight 256 from Rio de Janeiro.

Isabelle, 63, kicked the cart until it toppled over and flight attendant Carlos Carrico grabbed his arm, the sources said. Isabelle -- who identifies himself as a Vietnam vet on his Facebook profile -- then allegedly slugged Carrico, 48, twice.

Carrico, another flight attendant and a passenger wrestled him to the ground and placed plastic cuffs on him.

After the plane landed, Isabelle was taken into custody by Port Authority cops and brought to Jamaica Hospital for a psych evaluation.

Carrico declined to file a criminal report.
Posted by Sam at 5:12 AM