The face of madness? 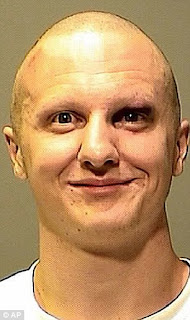 Is this guy just happy to be there or is he just a lunatic enjoying his 15 minutes of fame?

I think its the latter.

PHOENIX (AP) — When Jared Loughner walked into the courtroom, everything fell silent.

Law clerks, courtroom artists and reporters alike turned from the wooden benches to look at the vacant-eyed 22-year-old accused of trying to assassinate U.S. Rep. Gabrielle Giffords and killing a federal judge in a weekend shooting in southern Arizona that left five others dead.

Wearing a beige prison jumpsuit and handcuffs and sporting a pink gash on the hairline of his shaved head, Loughner on Monday afternoon spoke just a brief reply when the judge asked if he understood that he could get life in prison — or the death penalty — for killing federal Judge John Roll.