Deficit foretold by One tough Grandma 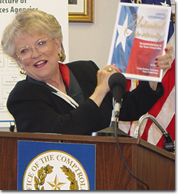 So it seems that Carole Keeton Srayhorn was correct after all in her assessment that the things that Governor perry wanted to do would run-up a $23 + Billion deficit over 5 years.

No one listened, particularly Governor Perry, and here we are.

AUSTIN — Comptroller Carole Keeton Strayhorn didn't win friends five years ago when she warned Gov. Rick Perry and state lawmakers they were writing the “largest hot check in Texas history” during a tax overhaul that resulted in lower property taxes and a revised business tax.

Strayhorn told them their plan would fall about $23 billion short over a five-year period. Five years later, state leaders are staring at an estimated budget shortfall of nearly $27 billion.

The nation's economic collapse three years ago contributed to some of the state's revenue troubles, but the biggest problem is that the new business tax did not generate enough money to pay for the school property tax cut, Strayhorn said Friday.