"Hitting it hard a lot" 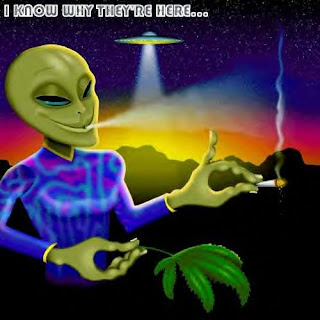 How fitting is it that the homes and school of the pot-smoking 3rd graders is in Roswell, New Mexico.

Home of the UFO and mysterious aliens of 1948.

ROSWELL, N.M. (AP) - Authorities in Roswell say two third-graders at Berrendo Elementary School have been caught by their principal smoking marijuana in a bathroom after school hours.

When a responding sheriff's deputy asked one of the boys how many times he had smoked pot, the boy replied he has "hit it hard a lot."

According to police reports, principal Kathleen Gallaway doesn't want to press charges and will punish the children "administratively through the school."

The sheriff's office contacted the Children, Youth and Families Department and determined the case to be closed.
Posted by Sam at 5:50 PM