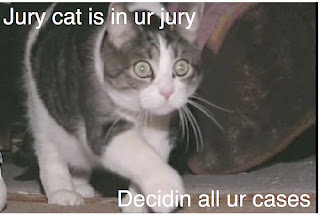 Is this typical bureaucratic mind-think?

No, your cat can't get off of jury service.


Anna Esposito, wrote to Suffolk Superior Crown Court in Boston, US, to explain that a mistake had been made, but a jury commissioner replied saying the cat, named Tabby Sal, "must attend" on March 23.
Mrs Esposito had included a letter from her vet confirming that the cat was "a domestic short-haired neutered feline".
Tabby Sal had been entered by Mrs Esposito under the 'pets' section of the last census. "When they ask him guilty or not guilty? What's he supposed to say - miaow?" She said.
"Sal is a member of the family so I listed him on the last Census form under pets but there has clearly been a mix-up."
A website for the US judicial system states that jurors are "not expected to speak perfect English".
Posted by Sam at 8:57 AM