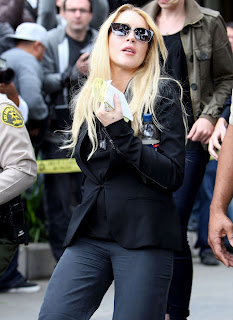 I have a buck that says she doesn't show up at or before 8:30 a.m. PST to turn herself in for jail.

I mean we're talking Lindsay Lohan after all.  There will be drama.

So much for Lindsay Lohan's legal Dream Team.

On the eve of her surrender, the jail-bound starlet's incoming attorney, former O.J. Simpson defender Robert Shapiro, stepped down following a private meeting with the judge who's been presiding over Lohan's case, reports the L.A. Times.

Shapiro publicly acknowledged just days ago that he was representing the troubled actress on the condition that she comply "with all of the terms of her probation, including a requirement of jail time."

She's due to turn herself in tomorrow, so what went wrong?!

Last week, she checked into Pickford Lofts, a sober-living house started by Shapiro after he lost his son Brent to a drug overdose in 2005. Shapiro was spotted heading into the building on Thursday, as was Lohan's assistant.

Though ostensibly a positive step, it may have been Lohan's brief stay at the Los Angeles residence that made things worse. A source tells E! News that Shapiro was not happy with her behavior there.

"She was unruly," the source says. "She was having people over at all hours of the night. She acted like she ran the place."

According to various reports, Lohan had a tough weekend, nibbling on her nails and chain-smoking as she dreaded being locked up Tuesday—even though she'll probably only spend about three weeks in jail rather than three months.

As of today, the L.A. District Attorney's Office had no advance knowledge of an attempt on Lohan's part to appeal her sentence, though a source close to her had told E! News that Lindsay wanted to spend her 90 days in a locked-down rehab facility, rather than jail (after which, she'll have to go to court-ordered rehab anyway).

Lohan's expected at the Beverly Hills Courthouse at 8:30 a.m., after which she's due to be transported to the Century Regional Detention Facility in Lynwood.

It's unclear now who will be representing Lohan in court. Calls to Shapiro and the attorney he was supposed to be replacing, Shawn Chapman Holley, have not yet been returned. Holley never signed the paperwork that would have officially removed herself as Lohan's counsel.

"The only 'bookings' that i'm familiar with are Disney Films, never thought that i'd be "booking" into Jail... eeeks," the onetime Parent Trap star tweeted tonight.
Posted by Sam at 7:48 AM