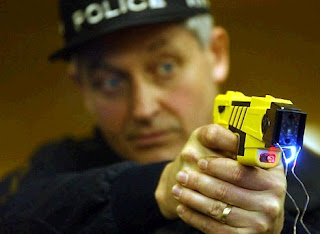 Prediction:
The officer who tasered the other officer gets off on a defense of another theory.

HAVERHILL — Two police officers were in Haverhill District Court yesterday — not as prosecution witnesses, but as defendants in late-night fracas during which one off-duty officer Tasered the other.

Lawrence Patrolman Daron Fraser, 39, of Raymond, N.H., was charged with domestic assault and battery and assault on a pregnant woman outside her home in Haverhill Tuesday night.

Kingston, N.H., Patrolman Joshua Wallar, 26, of Methuen, who subdued Fraser with a Taser issued by his department, was charged with assault and battery with a dangerous weapon.

Meanwhile, the woman Fraser is accused of assaulting, Odris Severino, 30, said in an interview with The Eagle-Tribune yesterday that it was not a case of domestic violence, just a "giant misunderstanding."