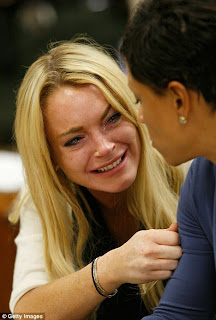 I'm surprised the Judge put up with all of her shenanigans and still gave her until the 20th (2 weeks) to report to the County jail.


Bawling and broken, Lindsay Lohan learned today that she's going back to jail.

Following Revel's ruling, Lohan broke down sobbing, barely sputtering a "yes" when Revel asked if she understood and accepted the terms of her probation. Revel ordered Lohan to surrender on July 20 at 8:30 a.m. PT.

According to Steve Whitmore, spokesperson for the Los Angeles County Sheriff's department, Lohan will serve her time at the Century Regional Detention Center in Lynwood, California and will be segregated from the general jail population.