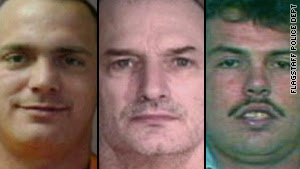 Please call the local authorities if you have.

They are apparently armed and dangerous.

The Arizona Department of Corrections and the Flagstaff police said on Saturday that the three disappeared from a medium-security facility and are considered to be armed and dangerous.

State and local authorities are searching for the men, who were discovered missing after the 9 p.m. count in prison. All three suspects were serving time on murder convictions.

Early Saturday morning, Flagstaff police said the suspects abducted two people at gunpoint and then released them at a local truck stop in the Kingman area.


Police said the convicts are also with a woman who helped them escape. She was identified as 43-year-old Casslyn Mae Welch, who is 5 feet 3 inches tall and weighs 135 pounds with brown hair and green eyes.
Posted by Sam at 5:37 PM