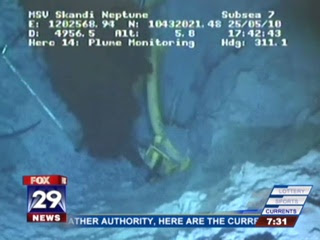 This is potentially a huge problem.  If there is seepage around the wellhead then it probably indicates that there is oil and methane seeping out around the outside of the well casing.

That my friends can continue to erode the formations around the casing and then allow the oil and gas to escape outside the well head which will make this truly uncontrollable.

I believe they better get a pipe to the surface and start allowing the oil to flow out of the well again to relieve the back-pressure.

Get those relief wells finished pronto!

Engineers monitoring BP's damaged well in the Gulf of Mexico detected seepage on the ocean floor that could mean problems with the cap that has stopped oil from gushing into the water, the U.S. government's top oil spill official said on Sunday.

Earlier on Sunday, BP officials had expressed hope that the test of the cap which began Thursday could continue until a relief well can permanently seal the leak next month. Oil gushed from the deepsea Maconda well for nearly three months until the new cap was put in place last week.

But late on Sunday, the U.S. government released a letter to BP Chief Managing Director Bob Dudley from retired Coast Guard Admiral Thad Allen that referred to seepage near the mile-deep (1.6 km-deep) well as well as "undetermined anomalies at the well head."