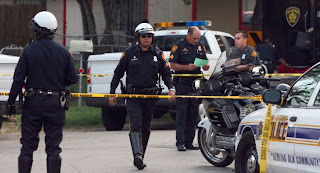 Alcohol, unemployment and domestic disharmony is a volatile mixture.

Thank God none of the children were physically injured.

Two San Antonio police officers fatally shot a knife-wielding man at his Southwest Side home early Tuesday after he cut an officer's hand — and his own arms — during a domestic disturbance, police said.

His wife had called police, and the couple's five children were in the home.

It was the seventh fatal incident that included an officer-involved shooting this year, the same as in all of 2009. San Antonio police officers have shot at people 16 times in 2010, already almost three-fourths of last year's total.