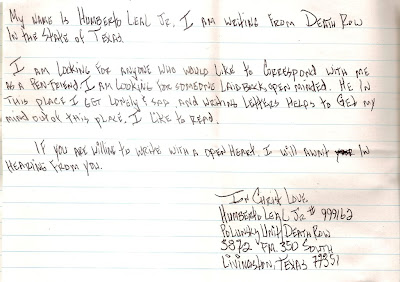 Infringement by the Feds?

I would come down on the side that Cliff Herberg and the Bexar County DA's Office comes down on.  The Judge should set a reasonable date for the execution and then the Defendant, Leal, can go seek a longer stay through Federal relief.  I don't believe it should be set off indefinitely.

BTW the teen he brutally raped and bludgeoned to death doesn't get to write letters like the one depicted.


A hearing to set the execution date for death row inmate Humberto Leal Jr. was postponed this week after the judge overseeing the case received a last-minute letter from a high-ranking U.S. State Department official.

Leal, a Mexican citizen who has been on death row since 1995 for the rape and bludgeoning of a 16-year-old San Antonio girl, had already been transferred to the Bexar County Jail for the Monday hearing. State District Judge Maria Teresa Herr had been expected to set the execution for October.

But Harold Hongju Koh, a top legal adviser to Secretary of State Hillary Clinton, asked Herr for an indefinite postponement as Congress works on legislation that could affect Leal's case.