He made him do it 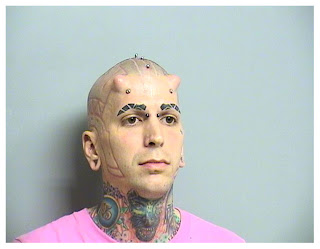 Man I can just imagine the thoughts that went through that Landlord's mind as his renter, pictured in the booking photo on the left, was trying to run him over.

Meet Jesse Thornhill. The Tulsa man was arrested early today after he allegedly tried to run down his landlord with a car. Following his arrest for assault with a dangerous weapon, Thornhill, 28, was booked into the Tulsa County jail, where this booking photo was snapped.

According to cops, the landlord was in the street when Thornhill "attempted to strike her with his vehicle but missed" due to her "jumping out of the vehicle's path." Thornhill was released this morning after posting $10,000 bond in connection with the felony rap.