look before you leap 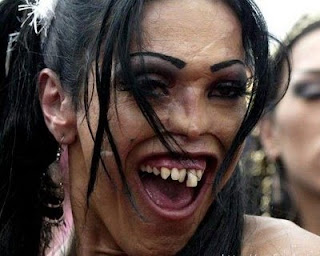 You should pardon the expression..."never look a gift horse in the mouth"

GAINESVILLE, Fla. (AP) - A man went to the police after getting robbed by a woman he intended to pay for sex, but refused when she flashed a smile full of bad teeth. The man told investigators he and a 25-year-old woman were negotiating a price until he noticed her dental problems. He told police that after he resisted, she snatched a checkbook containing $78 from his shirt pocket and fled.

The man told authorities she merely got scared and ran, not knowing he had tucked a wad of cash into her bra.

The woman was arrested on a robbery charge.

Gainesville police said it was unlikely the man would face misdemeanor charges for solicitation, because he was the victim of a felony.
Posted by Sam at 9:11 AM