The World Cup of Cocaine 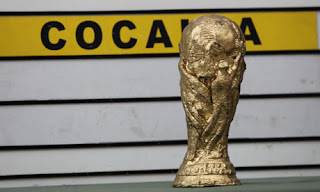 What a prize!   The World Cup of Cocaine!!

How fitting it was in Columbia.

BOGOTA, Colombia (AP) - Fans worldwide have fashioned replicas of the World Cup trophy out of everything from papier-mache to plastic. But a lawbreaker in Colombia gets top prize for most original material: cocaine.

The 36-centimeter-high (14-inch-high) statue was inside a box headed for Madrid, Spain. The statue was painted gold with green stripes on the base.

Piedrahita said Saturday that laboratory tests confirmed the cup was made of 11 kilos (24 pounds) of cocaine mixed with acetone or gasoline to make it moldable.
Posted by Sam at 4:41 PM