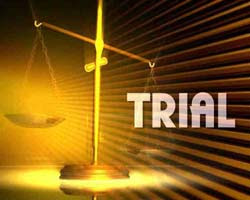 He was found not guilty of capital murder but guilty of the lesser included offense of reckless injury to a child using a deadly weapon.

SEGUIN — Michael League was acquitted of capital murder Tuesday night in the death of a 27-day-old baby, but he was found guilty of reckless injury to a child using a deadly weapon.

Testimony began June 28, more than three years after League, 34, was indicted in the death of Kyndra Billig, the infant daughter of his girlfriend, Lisa Billig.