Not much folks to help 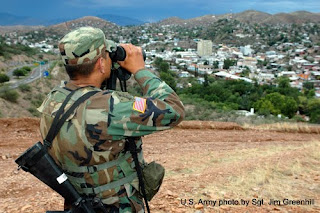 I was told several years ago by some AUSA's out of Del Rio there was some 4000+ crossings a month by illegal immigrants and folks in the area.  That was then, how will 250 troops help?

The troops are part of 1,200 National Guardsmen ordered to the border by President Barack Obama in May.

Texas Gov. Rick Perry on Monday criticized the president's plan to beef up border security, saying that only 20 percent of the guardsmen deployed will end up in Texas, which has 64 percent of the 1,969-mile border with Mexico.