He has the sole of a bandit 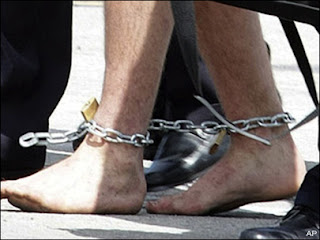 I'm sure this will made into a movie.

How did they know the guy they caught was him?

Why; just look at the photo.


NASSAU, Bahamas – For two years he stayed a step ahead of the law — stealing cars, powerboats and even airplanes, police say, while building a reputation as a 21st-century folk hero. On Sunday, Colton Harris-Moore's celebrity became his downfall.

Witnesses on the Bahamian island of Eleuthera recognized the 19-year-old dubbed the "Barefoot Bandit" and called police, who captured him after a high-speed boat chase, Bahamas Police Commissioner Ellison Greenslade said at a celebratory news conference in Nassau, the capital.

Greenslade said shots were fired during the water chase but he did not say who fired them. He also said Harris-Moore was carrying a handgun that he tried to throw away.