The Mother of all Clusterfarks 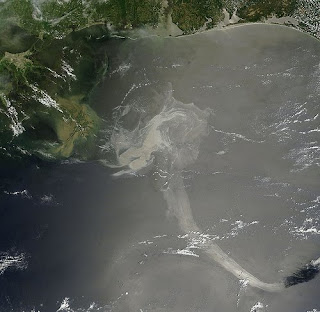 Day 80 of the World's biggest clusterfark and now we will get several days of uninterrupted oil spewage into the gulf as we try out Top Hat #10.

This view from Space ought to give you an idea of the magnitude of this ...ahem!... oil leak.

Feds cautious on timing for new cap in Gulf leak
By TOM BREEN, Associated Press Writer
NEW ORLEANS – Undersea robots manipulated by engineers a mile above were expected to begin work Saturday removing the containment cap over the gushing well head in the Gulf of Mexico to replace it with a tighter-fitting cap that could funnel all the oil to tankers at the surface.

If all goes according to plan, the tandem of the tighter cap and the tankers could keep all the oil from polluting the fragile Gulf as soon as Monday.

But it would be only a temporary solution to the catastrophe unleashed by a drilling rig explosion nearly 12 weeks ago. It won't plug the busted well and it remains uncertain that it will succeed.

When the cap is removed, oil will flow mostly unabated into the water for about 48 hours — long enough for as much as 5 million gallons to gush out — until the new cap is installed.