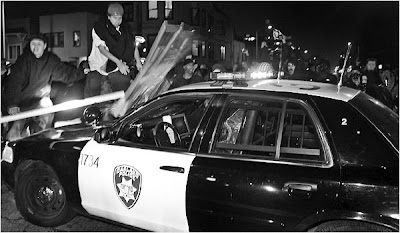 I was afraid this would happen and it did.

By Steve Gorman and Peter Henderson
LOS ANGELES/OAKLAND California (Reuters) - A white former transit police officer was found guilty of involuntary manslaughter in a videotaped shooting death of an unarmed black man last year in Oakland, California, sparking a wave of looting and destruction in the city on Thursday.

The verdict prompted a peaceful protest by up to 1,000 people in downtown Oakland, which gave way after nightfall to some people looting stores, smashing car windows, throwing powerful fireworks at police and lighting fires in trash cans.

The police, numbering in the hundreds, made more than 50 arrests, but Oakland police expected that figure could double.

"This city is not the wild, wild West," Oakland Police Chief Anthony Batts told a televised news conference. "This city will not tolerate this activity."