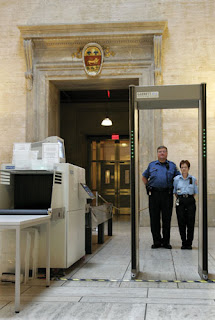 Hopefully the committee will be formed soon and the issues looked into.

Since Comal County voters rejected a $36 million bond proposal to build a justice center in May, county commissioners have moved forward with security enhancements at the courthouse in New Braunfels.

Last month, commissioners authorized additional security officers, along with more than a dozen video cameras and a metal detector in the courthouse.