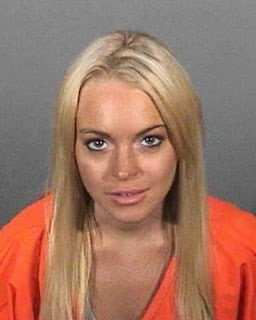 Will there be more drama?

It involves Lindsay Lohan so of course there will be more drama.

BTW I think orange is not a good color for Lindsay it makes look all Oompa Loompa-ish.

As Lindsay Lohan begins her sentence Tuesday at a Lynwood jail, she is not the only tabloid subject at the facility.

She had pleaded no contest to charges against her in connection with the "bling ring" burglary crew that targeted celebrity homes, including Lohan’s Hollywood Hills residence.

Whether the two women will be in the same module at the Century Regional Detention Facility remains to be seen.

“I am not commenting on who would or would not be in the same module as any inmate in the Century Regional Detention Facility or for that matter anywhere in the L.A. County jail system,” said Steve Whitmore, a sheriff’s spokesman.

Lohan has been sentenced to 90 days in jail for violating her probation on a drunk-driving conviction.

Neiers began serving her sentence last month and, according to accounts from her family, is having a tough time at jail. Her mother, Andrea Arlington, regularly posts Twitter updates on her daughter. Her mother said family members initially did not get to visit Neiers because of a broken elevator.

Arlington says jail food and conditions have been arduous for the 5-foot-6 Neiers, who usually weighs about 100 pounds. “She has lost 8 lbs. since she is in there from being so sick and from not being able to keep down the food,” Arlington posted earlier this month. “Typically I don't advise candy bars, but I told her she better buy some next time she gets to order commissary and start putting on some weight before she disappears!”


Arlington said Neiers was also struggling to get a razor. “She was not lying when she said that her leg hair was almost long enough to braid and proudly showed us all!,” Arlington reported after a jail visit. “Orange is a great color on her and is the color of her jumpsuit, she added, saying her daughter is still smiling."Orange is the new Black!"
Posted by Sam at 7:44 AM