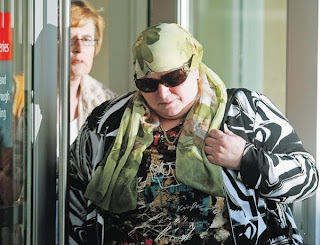 A tragic event for all concerned.

Outrage over ruling that mom who strangled daughter won’t be jailed
By Daryl Slade, Postmedia News

CALGARY — A Calgary mother won’t spend a day in jail for killing her teenage daughter with a head scarf — a decision that has prompted outrage.

A national victims’ group, based in Toronto, is stunned by the suspended sentence given to Aset Magomadova by Court of Queen’s Bench Justice Sal LoVecchio on Thursday.

“I really strongly disagree. It sends a massively huge message to the rest of the country and the world that her daughter’s life was valueless,” said Joe Wamback, co-founder and chairman of the Canadian Crime Victims Foundation.

“Even though this girl may have been a handful and trouble, that’s not the issue. The issue is human life.
Sentencing is not just about the criminal, but has to speak for the victim and to denunciation.”

In October, LoVecchio acquitted Magomadova, 40, of second-degree murder and found her guilty of manslaughter in the death of Aminat, 14. He placed her on probation for three years with several conditions, including taking counselling for grief, depression and anger management.

The judge rejected an argument by Crown prosecutors Mac Vomberg and Sarah Bhola for a 12-year prison term, instead accepting the position of defence lawyer Alain Hepner, saying a suspended sentence can still meet the demands of justice.

“At first blush (a suspended sentence) may sound like a get-out-of-jail-free card. It is not,” said LoVecchio.

“The court has said the act in question does not merit a period of incarceration. What the court has done is reserved or, to use the word of the statute, suspended judgment on that point for a period of time on conditions. If the conditions are satisfied, then the individual will not be sentenced. If they are breached, the individual will be brought back to the court to be dealt with further.”

Magomadova was charged after the deadly incident at their home the morning of Feb. 26, 2007, after Aminat refused to go to court to be sentenced for assaulting a female teacher at her school.

The devout Muslim mother claimed Aminat came at her with a knife in her sewing room, where she prayed several times a day. She said she reacted by wrapping the scarf around her daughter’s neck and twice told the girl to put the knife down before the teen lost consciousness.

A knife was found in the room, but the daughter’s fingerprints were not on it.

LoVecchio, who rejected a defence of self-defence, deemed the woman did not intend to kill the teen, even though medical examiner Dr. Sam Andrews testified that death as a result of such an act would have taken at least 2 1/2 minutes.

“It’s relatively unusual to see a mother killing a child, especially an older child,” said Koshan. “So it’s rare for the court to be faced with this situation. Maybe that influenced the judge in his decision.”

Marilyn Millions, one of Magomadova’s sponsors with St. James Anglican Church, said outside court she was relieved “at the compassion and mercy that has been shown” by the court.

“There were lots of tears and emotion,” she said. “If you’ve lived through it and you’ve gotten to know these people, it’s all in the context. It’s a lot different than reading a little bit about it. It’s a very different situation.”

Millions also said it was the wish of the family that “people would know mental-health services for young people and help for their families will be improved, and changes made to the system, so that others who have to go through similar situations do not fall through the cracks.”

Hepner said his client was crying after she learned she’d be free to go home and agreed it was an appropriate sentence.

“The judge considered all the factors and it was a very lengthy decision,” said Hepner, who had sought either a conditional jail sentence to be served in the community or the suspended sentence. “He considered the background, psychological and psychiatric background. What else can a judge do in arriving at a proper decision?”

LoVecchio said he wrestled with the dynamics of the family in reaching his conclusions.

He noted that the woman came to Canada for a better life for herself and her children from Chechnya, where her husband had been killed by Russian invaders and she had part of her foot blown off.

“This was a family in crisis with events spiralling out of control,” he said, alluding to the friction between Aset and Aminat leading up to the deadly confrontation that morning.

“It cannot be reduced to simply a case of mom choosing to kill her daughter as a form of discipline because she misbehaved. Quite simply, the events of that morning cannot be seen as a single isolated event.”

The Crown appealed the conviction long ago and is almost certain to take the sentence to the Alberta Court of Appeal, but Vomberg said he could not comment about such a possible situation at this time.

Both sides are allowed under law to have 30 days to file a notice of appeal.
Posted by Sam at 8:24 AM