A Darwin Award finalist for sure 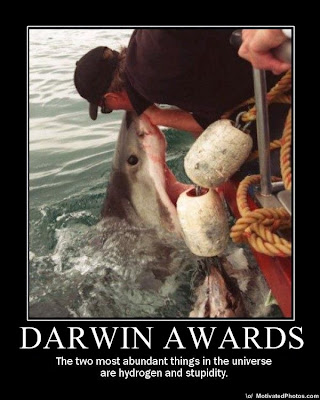 What an incredibly stupid thing to do.

This ought to make him at least a finalist in this year's Darwin Awards.

Driver shoots himself in the head
By Peter J. Holley - Express-News

A man in his early 20s was killed Saturday when he accidentally shot himself in the head while driving on the Northeast Side, police said.

The man was driving a blue SUV along FM 1976 near Eisenhauer Road with two friends just after 6 p.m. when he unexpectedly pointed the weapon at his head and made a comment in jest before pulling the trigger, police said.

The passengers, who were unhurt, told police that moments earlier the man had tried to remove the gun's bullets when a police cruiser passed by, leading him to panic.