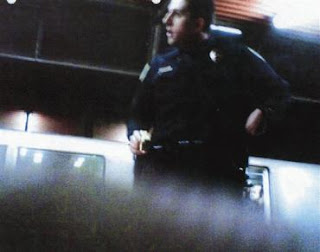 The jury convicted the officer for involuntary manslaughter not for second-degree murder.  He's looking at 5 to 14 years.

Yes, under pressure things happen.  Its a hard story to sell, that the right-handed officer reached to his right-handed holster drawing his gun, instead of the taser which he wears to the left of his belt buckle thinking he drew his taser and fired.

Not to mention the color cues, if as I presume, the taser was a bright yellow or yellow striped weapon.

I hope there won't be rioting in Oakland tonight.  Venue for the trial had been moved to Los Angeles.

LOS ANGELES -- A jury found former BART police Officer Johannes Mehserle guilty today of involuntary manslaughter in connection with the New Year's Day 2009 shooting of an unarmed train rider, finding that he had acted with criminal negligence when he fired a single shot into Oscar Grant's back at the Fruitvale Station in Oakland.


The Los Angeles jury reached its verdict at 2:10 p.m. today, after 6 1/2 hours of deliberations that began Wednesday morning when an alternate juror was seated to replace a panel member who had gone on vacation.

The involuntary manslaughter verdict indicates that jurors concluded that Mehserle did not intend to kill Grant but had been criminally negligent when he drew his gun. The former officer testified that he had mistaken the pistol for his Taser as he sought to subdue Grant following a fight on a BART train, a shooting that was captured on video by five other riders.

Mehserle, who had been free on bail, was remanded into custody and led away in handcuffs by bailiffs after the verdict was read. Dressed in a gray suit and blue shirt, he turned to family members sitting in the front row of the gallery, including his parents, and said softly, "I love you guys."

Members of Grant's family murmured in discontent as verdicts acquitting Mehserle of second-degree murder and voluntary manslaughter were read. There was little reaction from them when the former officer's conviction was announced.

But outside the court afterward, Oakland attorney John Burris, representing the family, said Grant's relatives were "extraordinarily disappointed" by what he called "a true compromise verdict."

Burris said the family believed the former officer should have been convicted of murder. "All have seen the video and understand the tragedy that has taken place," Burris said.

Grant's uncle Cephus Johnson said that "we knew from the beginning that we were at war with the system. ... We have been slapped in the face by this system that has denied us true justice."

In addition to involuntary manslaughter, the jury found that Mehserle had used a gun during the crime.

His possible sentence for involuntary manslaughter is two, three or four years, plus three, four or 10 years for using a gun. That means the minimum total sentence that Judge Robert Perry could impose would be five years, and the maximum would be 14 years.

Sentencing was set for Aug. 6.

Security was heavy in the courtroom as the jury filed in just after 4 p.m. Mehserle had entered a few minutes before, looking shaken and nervous. Grant's mother, Wanda Johnson, was in the second row of the gallery, her head bowed in apparent prayer.

When the "not guilty" verdict was read to the second-degree murder charge, Mehserle's father, Todd Mehserle, began to sob. One of the jurors also dabbed at her eyes.

Mehserle's shooting of Grant was witnessed by dozens of New Year's revelers, most of whom were on their way home from a fireworks show in San Francisco. It prompted a series of protests, including one that mushroomed into a riot in downtown Oakland.

Alameda County prosecutor David Stein said during the trial that Mehserle had "lost all control" of his emotions and shot the 22-year-old Grant intentionally in the back after briefly trying to handcuff him following a fight on a train. Grant, who had a young daughter, was unarmed and on his chest.

Taking the stand near the end of the trial, Mehserle testified that he had decided to use his Taser on Grant because he saw Grant put his right hand in his pants pocket and believed the Hayward man might be reaching for a gun.

Mehserle said he had accidentally pulled out his pistol and fired a single shot before realizing he had grabbed the wrong weapon.

Mehserle's Taser was positioned to the left of his belt buckle. The right-handed officer's gun was on his right hip.

Grant had been detained at about 2 a.m., along with four friends, for fighting on a Dublin-Pleasanton train. He and a second man were soon placed under arrest by then-BART Officer Anthony Pirone, who said they had resisted him. Stein argued that the arrest itself was unlawful because Grant had cooperated.

Video footage played repeatedly in court showed that as Mehserle raised his gun, Pirone had his left knee on Grant's neck. Pirone's left hand was pressing Grant's head into the platform, and Pirone's right hand was holding Grant's right arm - the same one Mehserle said he had struggled with - behind his back.

The shooting brought on a tumultuous period at BART, which has a full-service police force of about 200 officers. Police Chief Gary Gee retired late last year, and outside auditors criticized the transit agency for the way it trained, supervised and disciplined cops.

Pirone and his partner the night of the shooting, Marysol Domenici, were fired earlier this year by BART - Pirone for his actions on the train platform and Domenici for the way she reported the incident to investigators.
BART agreed in January to pay $1.5 million in a civil settlement to Grant's daughter, Tatiana Grant, who is now 6. Grant's mother and several of his friends who were with him when he was shot still have pending lawsuits.

The trial was moved to Los Angeles in part because of the tensions the killing caused in the East Bay. Some community leaders, activists and others believe the shooting underscored a larger problem of police officers abusing people of color with little accountability.

The defense put much of the blame for the shooting on poor training at BART - particularly Taser training, which Mehserle received a month before the shooting - and on the character of Grant, a parolee who had spent time in prison.

Defense attorney Michael Rains argued that Grant never stopped resisting Mehserle's efforts to handcuff him before he was shot.

The case marked the first murder prosecution of an on-duty Bay Area police officer. Prosecutors rarely file charges against police for shootings. A Chronicle review of police use-of-force cases around the country found just six cases in the past 15 years - not including the BART shooting - in which murder charges had been filed.

The cases, involving a total of 13 officers, typically resulted in large civil payouts to victims' relatives. However, none of the officers was convicted of murder and most were acquitted or cleared altogether. One pleaded no contest to manslaughter and got three years in prison.