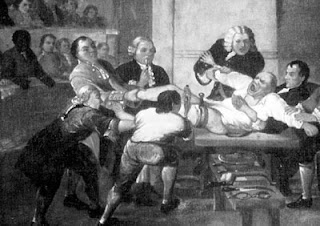 Hey!  They have National Healthcare in North Korea and we don't.

But folks are still working and hoping to get it here.

Report: Amputations without anesthesia in North Korea
By Hyung-Jin Kim  - My way news

North Korea's state health care system has been deteriorating for years amid the country's economic difficulties. Many of its 24 million people reportedly face health problems related to chronic malnutrition, such as tuberculosis and anemia, Amnesty International said in a report on the state of the health care system.

A 24-year-old defector from northeastern Hamkyong province told Amnesty that a doctor amputated his left leg from the calf down without anesthesia after his ankle was crushed by a moving train when he fell from one of the cars.

"Five medical assistants held my arms and legs down to keep me from moving. I was in so much pain that I screamed and eventually fainted from pain," said the man, identified only by his family name, Hwang. "I woke up one week later in a hospital bed."