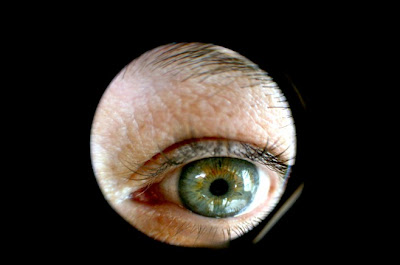 Now this is a particularly pathetic crime to go to jail for.

​When fellow inmates ask 20-year-old Bradley J. Wallen what he's in for, he's either going to have to lie or get beaten to death with laughter. The tale of our pathetic perv begins at the Flashbacks and Reruns thrift store in Church Hill, Tennessee...

It seems someone had cut a peephole that allowed them to get a peek of the women's dressing room from the men's dressing room. We're guessing that someone was Bradley Wallen. Employees found it and patched it up. But never underestimate the determination of your low-rent degenerate.

Our hero returned to the store the other day, grabbed some shirts, and repaired to the men's dressing room. He apparently knocked the patch out and resumed his voyeuristic action.

That's when a woman dropped something in the adjoining dressing room and bent to pick it up, only to find an eye staring at her through the peephole.

Wallen tried to escape through the back door, but the women blocked his way. And seeing how he's a pussy not seen since the French soccer team, he was unable to fight his way through their blockade -- or just too scared to try.

He was subsequently arrested for observation without consent and photographing in violation of privacy. Yes, the creep took photos with his cell phone. But since they're both misdemeanors, he won't be charged as a sex offender.
Posted by Sam at 9:27 AM